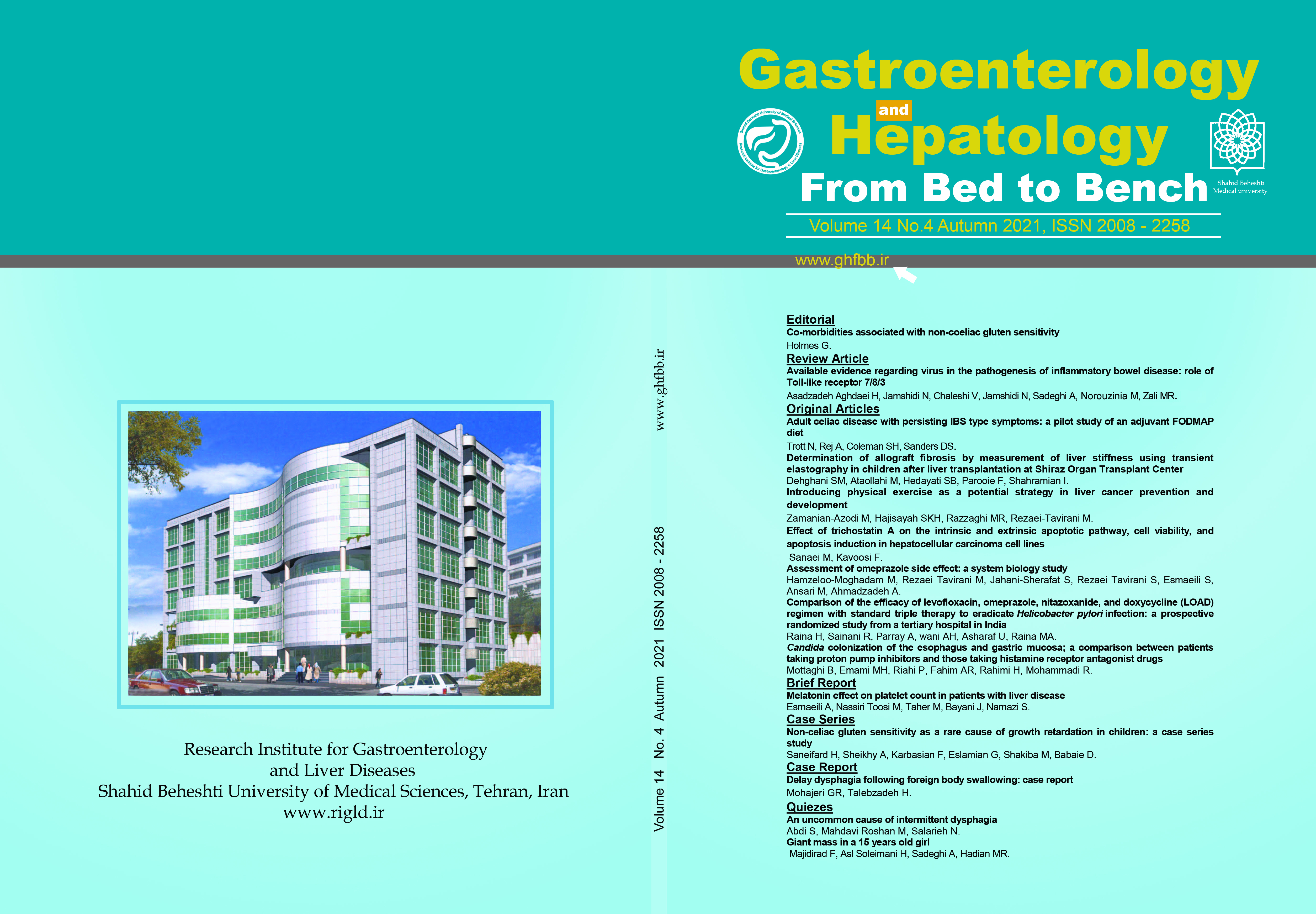 Virus in the pathogenesis of inflammatory bowel disease: role of Toll-like receptor 7/8/3

Inflammatory bowel disease (IBD) pathogenesis is influenced by immune system malfunction, particularly innate immune receptors such toll-like receptors. Furthermore, due to the extreme close association between viruses and IBD incidence, it is critical to further investigation between the virus and IBD. TLRs 3, 5, and 7 are three members of TLRs family that are involved in antiviral immune responses. Finding a relationship between TLR related virus and IBD is important not only for disease pathogenesis but also for therapeutic effectiveness. Furthermore, it has been shown that influenza expresses severe in patients with IBD who use immune system inhibitors, and the influenza vaccine is less effective in these patients. In dendritic cells, TLR7 and TLR8 regulate the production of interferons (IFNs) and inflammatory mediators. COVID-19 causes the production of IL-6, which could be due to the induction of TLR pathways. TLR activation by SARS-CoV-2 causes inflammation and IL-1 production, which induces IL-6 to be produced. Understanding the TLR associated viruses’ molecular mechanism can greatly help improve the quality of life of people with IBD. Therefore, the present study aimed to review the role of TLR7, 8 and 3 in inflammatory bowel disease, their association with viral infections and to evaluate different antagonists for the treatment of IBD.

Patients with biopsy proven adult celiac disease (CD) may have on-going gastrointestinal symptoms despite adherence to the gluten-free diet (GFD). Functional gut symptoms including Irritable Bowel Syndrome (IBS) is one cause of persisting symptoms in CD patients. This pilot study assessed the benefit of an adjuvant low FODMAP diet (LFD) in adult CD patients established on GFD who had a normal remission biopsy.

Twenty-five adult CD patients who were adherent to the GFD were recruited. These patients had histologically normal villi on their remission biopsy. A specialist dietitian then offered an adjuvant LFD. Symptom response was assessed using the Gastrointestinal Symptom Rating Scale (GSRS) from baseline to follow up.

This is the first study to demonstrate an adjunct LFD is an effective dietary treatment for concurrent IBS in adult CD patients with biopsy-confirmed remission. Such patients should be seen by a specialist dietitian to ensure nutritional adequacy and appropriate reintroduction of FODMAP containing foods.

Introduction: Liver stiffness (LS) assessment using fibro-scanning (transient elastography-TE) is a non-invasive method for the evaluation of liver fibrosis. The aim of this study was to determine allograft fibrosis by measuring LS using TE in children after liver transplantation at Shiraz Organ Transplant Center.

Methods: All children undergoing liver transplant from 2012 to 2016 were included in the study. Demographic data, graft type, immunosuppressive drugs, as well as clinical and paraclinical data were obtained from patients’ records. TE was performed to determine LS in all patients. Liver fibrosis was also confirmed based on Metavir score.

Conclusion: Our study demonstrated that 14.9% of LT patients had a METAVIR ≥ F2. The time between LT and TE was significantly correlated with LS, and the degree of liver fibrosis based on Metavir score. However, there was no significant relationship between LS with allograft type as well as underlying liver disease

Aim. In this study, anticancer property of physical activity investigates via network analysis in the trained rats.

Methods. To investigate proteome profile of rats’ liver subjected to physical activity via bioinformatics, protein-protein interaction network analysis was applied. For this reason, a number of 12 differentially expressed proteins were searched and analyzed by Cytoscape 3.7.2 and its plug-ins. The network was analyzed to identify hub-bottleneck nodes. The action map was constructed for the central proteins.

Results. The findings indicate that among the queried proteins, Eno1 and Pgm1 were only assigned as hubs by Network Analzyer.  Gpi, Pkm, Aldoa, and Aldoart2 also were identified ad central nodes among the first neighbors of network elements. Furthermore, glycolytic process, carbohydrate catabolic process, and glucose metabolic process are the enrichment of key elements that could be imperative in the mechanism of exercise in liver function. Anticancer property of the central nodes was highlighted.

Conclusion. Our network findings point out the anticancer properties of physical activity, which was also supported by the previous investigations.

Effects of trichostatin A on the intrinsic and extrinsic apoptotic pathway, cell viability, and apoptosis induction in hepatocellular carcinoma cell lines

Side effects of Omeprazole: a System Biology study

Background: Omeprazole as a proton pump inhibitor has a widespread consumption to inhibit gastric acid secretion. Assessment of omeprazole effects on human cardiovascular system is the main aim of this study.

Methods: Gene expression profiles of “human coronary artery endothelial cells” in the absence and presence of omeprazole is downloaded from gene expression omnibus (GEO). The differentially expressed genes (DEGs) are interacted as an interactome and the hub nodes are determined. The DEGs are enriched via gene ontology (GO) analysis. The critical hubs are identified based on GO finding.

Results: Among 103 queried DEGs 61 individuals were included in the main connected component. CTNNB1, HNRNPA1, SRSF4, TRA2A, SFPQ, and RBM5 genes are identified as critical hub genes. Six clusters of biological terms were introduced as deregulated elements in the presence of omeprazole.

Conclusion: In conclusion, long time consumption of omeprazole may be accompanied with undesirable effects, however more evidences are required.

Helicobacter pylorus is a widespread infection in India. Resistance to commonly used antibiotics against Helicobacter pylori increases rapidly, leading to traditional triple therapy's lower success. So, a search for a new regimen is needed.

In this study, we compared the efficacy of  14-day triple therapy with a novel ten-day LOAD regimen to eradicate Helicobacter pylori infection in India .

Although the rate of eradication of H. pylori infection with the LOAD regimen was significantly higher than that with triple therapy, the efficacy was still suboptimal. It may be due to fluoroquinolone resistance or a short course of treatment.

Candida colonization of the esophagus and gastric mucosa; a comparison of patients taking proton pump inhibitors and those taking histamine receptor antagonist drugs

Aim: Investigation of Candida colonization of the esophagus and gastric mucosa in patients taking proton pump inhibitors in comparison to those taking histamine-2 receptor antagonists.

Background: Candida species are normal flora of alimentary tract can cause infection of the esophagus and gastro-intestinal tract in immunocompromised patients. Consumption of proton pump inhibitors, and histamine-2 receptor antagonists have shown to alter the gastric pH which may predispose to floral transmission and colonization of the esophagus and stomach.

Patients and methods: Two hundred and forty-five clinical specimens were obtained from 91 patients underwent endoscopy from September 2019 to February 2020. Direct microscopy with KOH 10% and subculture on sabouraud dextrose agar containing chloramphenicol used as primary screening. PCR with ITS primers was performed to amplify ITS1-5.8SrDNA-ITS2 region and MspI restriction enzyme used for RFLP to identify clinical isolates.

Results: Seventy cultures out of 245 specimens were positive for Candida colonization (28.5%). Colonization of Candida species in gastric acid and gastric tissue biopsies of patients who took PPIs and H2 blockers was significantly higher than those were in control group (p = 0.001). The use of ranitidine, pantoprazole and omeprazole increased the risk of gastric candidiasis by 10.60, 9.20, and 12.99 times, respectively (p < 0.05).

Conclusion: The use of PPIs and H2 blockers, ageing, and consumption of vegetables were main risk factors for gastric infection in the present survey, and some other variables such as Candida species, cigarette smoking, drinking alcohol, etc. were not implicated in the development of gastroesophageal lesions. We need further investigations to know how these predisposing factors change the host defenses mechanisms and increase colonization of fungi at mucosal surfaces.

The prevalence of foreign body swallowing is high in both children and adults. Different types of objects can be ingested. In older individuals denture ingestion is common. They may be left in the esophagus after being swallowed and then repelled.

We present a case of a 62-year-old man who attended clinic due to dysphagia lasting for 5 years with an endoscopy report of a foreign body in his esophagus.

There are a few reports of the presence of these objects in the esophagus for a long time.

Chronic remaining foreign bodies may be associated with complications, so extraction of the foreign body, especially in elderly, should be made promptly following diagnosis.

Melatonin effect on platelet count in patients with liver disease

Thrombocytopenia occurs by exacerbating severity of liver disease. Reduction in the secretion of thrombopoetin, as an intrinsic hormone mainly produced by liver, plays an important role in this complication induced by liver disease. A positive effect of melatonin on platelet count in the patients with chronic liver disease was reported in the current study.

Design of this study was a double-blind, cross-over, placebo-controlled pilot study. The patients with liver disease were given two 5 mg pearls of melatonin or placebo for two weeks and after 2 weeks wash out period, we switched their groups. The liver function test and platelets count were assessed once at the beginning and once at the end of each phase of the study.

Melatonin may increase platelet count and inhibit thrombocytopenia in the patients with liver disease; however, more investigations are needed to confirm the obtained result.

Non-celiac gluten sensitivity as a rare cause of growth retardation in children: a case series study

Background: non-celiac gluten sensitivity (NCGS) is a condition characterized by gastrointestinal and extra-intestinal symptoms which triggered by ingestion of Gluten contained compounds i.e., wheat, rye, and barley, in subjects without celiac disease or wheat allergy.

Case presentation: hereby we present five children and adolescents with final diagnosis of NCGS. All patients had failure to thrive and abdominal pain. Following gluten free diet, clinical symptoms reduced and we detected significant weight and height gain after 1 month of diet.

Conclusion: relationship between failure to thrive and NCGS is still unknown, hence according to mentioned cases, NCGS may be one of the main causes of FTT, which can be prevented by gluten free diets.

An uncommon cause of intermittent dysphagia

A 42 year old woman admitted to the gastrointestinal department of Taleghani hospital; a teaching referral hospital in Tehran; Iran with epigastric pain; fever and dysphagia. She complained of intermittent dysphagia; regurgitation and epigastric pain( without any benefit from PPI treatment)  one month in each year from five years before admission.

Because this is a photo quiz, so, it has not abstract.