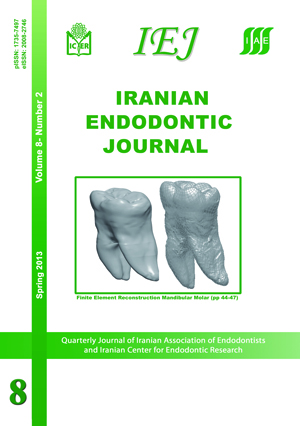 The Frequency of Medically Compromised Patients in Endodontic Offices in Iran

Introduction: As the result of epidemiological transition and aging of Iranian population, the frequencies of systemic diseases among patients in of need endodontic treatment has increased, especially within developed cities. However, there have been no concise reports of systemic diseases in Iranian patients. Based on this need, the present investigation was conducted to assess the frequency of systemic disease among patients referred to endodontic private practice in three main cities in Iran. Materials and Methods: In a retrospective study, the frequency of systematic diseases were abstracted from the health records of patients who were referred to three private practices limited to endodontics in Kerman, Mashhad, and Tehran between 1994 to 2011. Results: Overall, 15,413 records of patients were assessed. The patterns of systematic diseases among endodontic patients in these three cities were different. The overall frequency of systemic disease in Kerman was significantly higher than two other cities (Kerman: 55.03%, Mashhad: 24.32%, Tehran: 22.16%; P<0.001). The most commonly occurring diseases were cardiac disease, hypertension, allergy and neurological disorders. Conclusion: Since the number of endodontic patients with systematic diseases is considerably significant and varied, special training and educations for treatment of medically compromised patient should be considered at both post- and undergraduate training.

Treatment of Furcal Perforation of Primary Molars with ProRoot MTA versus Root MTA: A Laboratory Study

Introduction: Furcal perforations are one of the most challenging causes of endodontic failures. Several materials including MTA have been used for non surgical repair of these perforations. The aim of this study was to compare treatment outcome of furcal perforation treatment in primary molars using Root MTA and ProRoot MTA. Materials and Methods: This in vitro study was conducted on 54 primary first molars that were randomly divided into the two experimental groups of 24 teeth each and two control groups (n=6). After preparation of access cavities, perforations were made and the perforation areas were repaired using either Root or ProRoot MTAs. After staining and preparation of mesiodistal longitudinal sections, dye leakage was measured using a stereomicroscope. The data was analyzed by the Mann Whitney statistical test. Significant level was set at 0.05. Results: The data indicated that the dye leakage of ProRoot MTA is significantly lesser than Root MTA (P=0.001). Conclusion: ProRoot MTA showed good sealing ability in repairing furcal perforations of primary molars.

Introduction: Disinfection and subsequent obturation of the root canal space require adequate mechanical enlargement of the canals. The purpose of this in vitro study was to compare the shaping ability of Mtwo, RaCe and Medin rotary instruments during the preparation of curved root canals. Materials and Methods: Sixty mesiobuccal root canals of mandibular molars with severe curvatures between 25-35° and radius of 4-9 mm were randomly divided into three groups of 20 canals each. Using pre- and post-instrumentation radiographs, straightening of the canal and the apical transportation were determined with AutoCAD software. The data were analyzed using Chi square, analysis of variance, and post-hoc tests and the significance level was set at P<0.05. Results: Mtwo instruments maintained the canal curvature significantly better than Race and Medin instruments (P<0.05). There was significant difference between the rotary instruments for iatrogenic transportation of the major foramen (P>0.05). Conclusions: Under the conditions of this in vitro study, Mtwo instruments seemed superior to the two other rotary instruments.

Introduction: To evaluate the efficacy of NiTi mechanical rotary instrumentation and Hedstrom file for gutta-percha/sealer removal computed tomography (CT) was utilized in vitro. Materials and Methods: Thirty extracted human single rooted teeth, each with a single canal were selected. The samples were decoronated with a double faced diamond disk to have 17-mm root; teeth roots were instrumented with K-files up to master apical file #30 using step back technique. Samples were obturated using cold lateral condensation of gutta-percha and AH Plus root canal sealer. The teeth were then randomly divided into three groups of 10 specimens each. After 2 weeks 3-dimensional images of the roots were obtained by CT and the volume of root filling mass was measured. All the canals were then retreated by either the ProTaper retreatment files, Mtwo retreatment files or Hedstrom files. The canals were irrigated with 2 mL of 2.5% sodium hypochlorite irrigating solution during each change of instrument. The volume of remaining filling materials after the retreatment procedures was assessed by CT. Statistical analysis was performed with one-way ANOVA and Tukey’s post hoc test. Results: Neither of studied systems completely removed the root filling material. No significant difference was observed between the rotary systems. The volume of remaining filling materials was significantly less in rotary instrumentation than hand files. There was no significant difference for debris extruded from the apical foramen between the groups. Conclusion: Under the experimental conditions, Mtwo and ProTaper retreatment files left less gutta-percha and sealer than H files; however, complete removal of filling materials was not achieved by the three systems investigated.

Introduction: To evaluate the clinical and radiographic outcomes of pulpotomy treatment with mineral trioxide aggregate (MTA) in symptomatic mature permanent teeth with carious exposure. Materials and Methods: Ten patients aged 27-54 years presented with 11 symptomatic permanent teeth (n=11). Each offending carious tooth was clinically and radiographically determined. We removed caries as conservatively as possible; however pulp exposure was inevitable. ProRoot MTA pulpotomy was performed on these teeth. The patients were followed-up clinically and radiographically for 24-42 months. Results: Immediate relief of patients` symptoms occurred. Moreover, teeth responses to the electric pulp tester were within normal range on follow-up appointment and the radiographs did not reveal any abnormality/lesion in the periapical areas. Conclusion: Pulpotomy using MTA could be a good alternative for root canal therapy (RCT) for managing symptomatic mature permanent teeth with carious exposure, however further large-scale multicenter clinical trials are highly encouraged to confirm this hypothesis.

A definitive diagnosis of vertical root fracture (VRF) is often a challenging task for clinicians. This is because two dimensional periapical radiographs are usually unable to detect the fracture line due to the direction of the X-ray beam. This report presents a set of 3 cases of endodontically treated teeth that were diagnosed with VRFs based on findings from clinical, radiographic, and cone-beam computerized tomographic (CBCT) examinations. After extraction, VRFs were confirmed in all cases. The presence of periodontal pockets or other signs which would compromise the correct diagnosis could not be detected in all three cases. Fracture lines were only visible with the aid of CBCT which provided useful information for the diagnosis and management of VRF. However, the clinical and radiographic data should not be discarded, but used in conjunction with CBCT.

Root perforations are an undesired complication of endodontic treatment which result in loss of integrity of the root, and adversely affect the prognosis of the treatment. Recently, Iranian mineral trioxide aggregate (Root MTA) has been introduced as an ideal material for perforation repair. In this article a successful repair of strip root perforation of mandibular molar using Root MTA is presented with 15-month follow-up. This case suggests that Root MTA may be a substitute material for the treatment of strip perforation; however, more clinical studies with larger sample size and longer follow-ups are needed.

A Review of the Properties and Applications of Ozone in Endodontics: An Update

Ozone is a triatomic molecule consisting of three oxygen atoms. It is applied to oral tissues in the forms of ozonated water, ozonated olive oil and oxygen/ozone gas. This paper presents a brief review on the chemistry of ozone as well as its medical and dental applications focusing on its use in endodontics. Ozone’s antimicrobial activity, its effect on dentin bonding, toxicity and contra-indications are also reviewed.