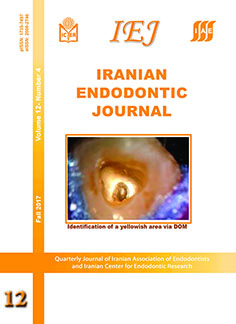 Efficiency of Different Endodontic Irrigation and Activation Systems in Removal of the Smear Layer: A Scanning Electron Microscopy Study

Introduction: This in vitro study was designed to evaluate and compare different endodontic irrigation and activation systems for removal of the intracanal smear layer. Methods and Materials: Forty recently extracted, non-carious human intact single rooted premolars were selected and divided into five groups (n=10) according to the root canal irrigation systems; syringe and needle irrigation (CTR), sonic irrigation, passive ultrasonic irrigation (PUI) and EndoVac irrigation system. All groups were prepared to #40 apical size with K-files. Each sample was subjected to final irrigation by using four different irrigation/activation systems. After splitting the samples, one half of each root was selected for examination under scanning electron microscope (SEM). The irrigation systems were compared using the Fisher's exact test with the level of significance set at 0.05. Results: The four groups did not differ from each other in the coronal and mid-root parts of the canal. In the apical part of the canal none of the methods could completely remove all the smear layer but EndoVac system showed significantly better removal of smear layer and debris than the other methods. Conclusion: Within the limitations of the present study, the EndoVac system cleaned the apical part of the canal more efficiently than sonic, ultrasonic and syringe and needle irrigation.