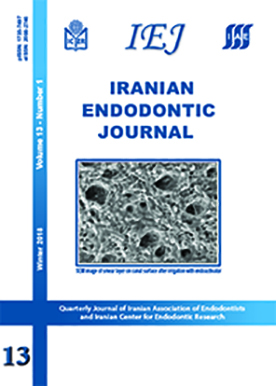 Introduction: The aim of the present study was to evaluate the radiographic quality of RCTs performed by undergraduate clinical students of Dental School of Isfahan University of Medical Sciences. Methods and Materials: In this cross sectional study, records and periapical radiographs of 1200 root filled teeth were randomly selected from the records of patients who had received RCTs in Dental School of Isfahan University of Medical Sciences from 2013 to 2015. After excluding 416 records, the final sample consisted of 784 root-treated teeth (1674 root canals). Two variables including the length and the density of the root fillings were examined. Moreover, the presence of ledge, foramen perforation, root perforation and fractured instruments were also evaluated as procedural errors. Descriptive statistics were used for expressing the frequencies of criteria and chi square test was used for comparing tooth types, tooth locations and academic level of students (P<0.05). Results: The frequency of root canals with acceptable filling was 54.1%. Overfilling was found in 11% of root canals, underfilling in 8.3% and inadequate density in 34.6%. No significant difference was found between the frequency of acceptable root fillings in the maxilla and mandible (P=0.072). More acceptable fillings were found in the root canals of premolars (61.3%) than molars (51.3%) (P=0.001). The frequency of procedural errors was 18.6%. Ledge was found in 12.5% of root canals, foramen perforation in 2%, root perforation in 2.4% and fractured instrument in 2%. Procedural errors were more frequent in the root canals of molars (22.5%) than the anterior teeth (12.3%) (P=0.003) and the premolars (9.5%) (P<0.001). Conclusion: Technical quality of RCTs performed by clinical students was not satisfactory and incidence of procedural errors was considerable.