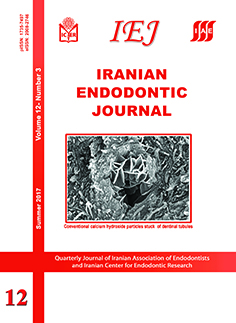 Introduction: Propylene glycol (PG) improves the handling, physical, and chemical properties of mineral trioxide aggregate (MTA). This study aimed to evaluate the effect of PG on the sealing ability of MTA and calcium-enriched mixture (CEM) apical barriers. Methods and Materials: A total of 70 extracted human maxillary single-rooted teeth were prepared using ProTaper rotary system. The apical 3 mm of the root tips were resected and the root canals were enlarged with Peeso reamers up to #4, to create open apex teeth. The teeth were then randomly divided into four experimental (n=15) and two control (n=5) groups. Group1: MTA+ MTA liquid, group2; MTA+MTA liquid (80%) + PG (20%), group3; CEM+CEM liquid, group4; CEM+ liquid (80%) + PG (20%). Cements were mixed with their respective mixing agents and a 4-mm thick apical plug was fabricated. The microleakage was measured on day 1, 3, 7 and 21 using a fluid filtration technique. The repeated measures ANOVA and Sidak test were used to analyze the data. Results: All experimental groups demonstrated various amounts of microleakage. No significant difference was found between MTA and CEM cement (P=0.193), regardless of time and liquid components. There was no significant difference was observed between liquids (P=0.312) in all time intervals. The rate of microleakage decreased over time and a significant differences was observed between all intervals (P<0.05), except 3-7 and 7-21 (P=0.190) days. Conclusion: PG demonstrated neither a positive nor a negative effect on the sealing ability of Angelus MTA and CEM cement.